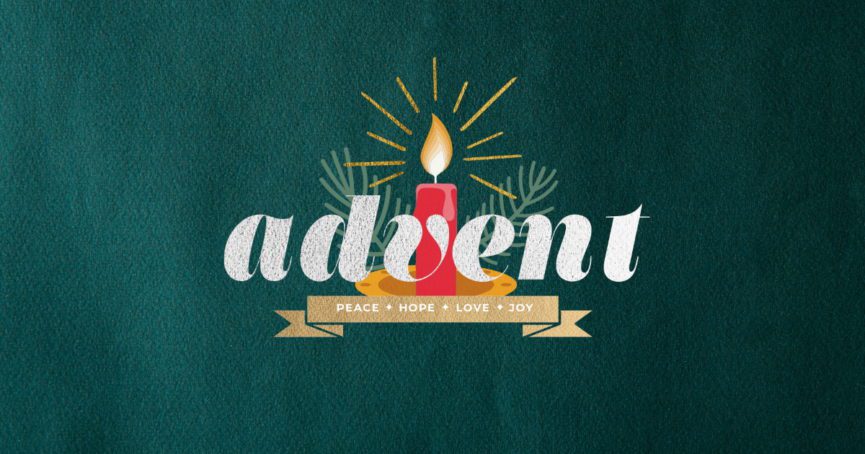 It’s the most wonderful time of the year, isn’t it? A season ripened by anticipation. We’re waiting for the big day to come — a day sure to be full of joy, reflection and peace. Right?

You’re likely thinking I’m alluding to Christmas Day — which, in our United Methodist Tradition, we observe on December 25 (like most other Christian denominations). Culturally that seems to be the big focus this time of year. In the church, our congregations are preparing for their Christmas observances and celebrations. The time leading up to Christmas is known as “Advent”. It might jar some to learn that Advent only kind of partially has anything to do with Christmas.

It is a time of heavy anticipation. It focuses on waiting for a big occurrence. But the anticipated occurrence or event is not actually fully realized on Christmas. During Advent we’re anticipating the full realization of something that began at the first Christmas (when Jesus Christ was born*) but isn’t yet fully realized. Technically Christmas begins on December 25.* Everything leading up to that date is Advent. And it’s important to note that distinction so we can be fully mindful of the hope that faith speaks into our human experience.

*While observing Christmas on December 25 we don’t actually claim that Jesus was born on December 25. We don’t know the date of Jesus’ birth. December 25 has become a culturally useful day for commemorating Jesus’ entry into human history.

The word “advent” derives from the Latin “adventus”, meaning “coming.” During its earliest observances, Advent was 40 days of repentance, fasting and prayer as new believers prepared for their baptisms. Oftentimes, these baptisms took place on the day of Epiphany — which is a day remembering the Magi’s visit to baby Jesus; it was a celebration of Jesus’ incarnation on Earth.

Later Christians began tying Advent not just to Christ’s incarnation, but to an anticipated second coming of Christ. Advent became a period for renewing the anticipation and longing for Jesus’ return.

Today, Advent is a period of preparation for both “advents” — or arrivals — of Jesus. Lester Ruth, a professor at Duke Divinity School and a historian of Christian worship, offered this distinction for Advent: “The simplest way I have to distinguish between Advent and Christmas is that advent uses the word “come” as a longing petition, expressed in anticipation, whereas Christmas is a commemorative reflection on how the Lord has come in Christ’s birth and thus the trigger for a new redemptive order has begun.”

In our culture, the close ties to Christmas seemingly outweigh the anticipation of another “advent” of Jesus. We conflate the Christmas commemoration and the anticipation of Advent. Ignoring this “second coming” removes some of the urgency of our Christian call to enact God’s love and justice on Earth.

What do we mean by “Second Coming”?

Most Christian creeds of faith contain some derivation of the following statement:

“Christ will come again to judge the living and the dead.”

In The United Methodist Church, we affirm that Christ will come again to judge the living and the dead as prelude to the revealing of the new creation. So when Christ returns a renewed creation comes, too. This new creation is marked by the unity of Creator and created alluded to in the book of Genesis. In the New Testament, this renewed creation is aligned with freedom from death, sin and decay. So the renewed creation takes the shape of a world without the bounds of death and liberated from the systems and actions through which humans tear themselves apart from one another and from God.

There’s a lot of hope inspired by believing that such a world is possible. Advent is a season for reflecting on and renewing that hope.

What do we do for Advent?

One of the ways we reflect on Advent in communal worship is by utilizing an Advent wreath — a simple wreath surrounding four exterior candles and one central candle. The four exterior candles represent the hallmarks of a renewed creation: joy, hope, peace and love. The central candle represents the presence of Christ. Each Sunday, one more of the exterior candles is lit. Finally, the Christ candle is lit as a reminder of Christ’s ongoing presence. We, of course, can bring this practice home, creating our own Advent wreaths and contemplating our own longings for more joy, hope, peace and love.

We also utilize music for reflection. Many songs communicate our Advent longings. Unfortunately, these songs are overshadowed during this season by songs that are explicitly Christmas-themed. Take a listen to some more Advent-aligned songs, listening for the expectations and longings they communicate. Check out our Advent playlist (with more input from Dr. Ruth).

Devotionals present weekly or daily opportunities for an explicit focus on a topic. Our friends at UpperRoom.org offer a free daily devotional that is Advent-focused during this season. Our friend Shane Claiborne also recommends CommonPrayer.net. It offers daily prayers speaking into our Advent expectations during this season.